Posted at 22:22h in Uncategorized by FederalDistilling 0 Comments
0 Likes
Share

Kentucky has her bourbon trail, Napa Valley has her wine and, soon, the narrow streets of the Riverwards will have their very own boozy claim to fame: Distiller’s Row.

There are five distilleries currently in Fishtown and Kensington and a sixth is on the way. They range from boutique operations like Rowhouse Spirits and Red Brick Craft Distillery to more commercially ambitious outfits like New Liberty Distillery and Federal Distilling. Philadelphia Distilling (coming soon to Fishtown) and La Colombe’s distillery round out the list.

These distilleries are a recent phenomenon: Until 2011, when Pennsylvania created limited distillery licenses, it was nearly impossible to open a distillery. The relaxed laws allow for distilleries to operate as long as they produce fewer than 100,000 gallons of liquor a year. These licenses also allow distilleries to sell their spirits directly to restaurants, bars and individuals.

Though the distillers are in competition with each other, there is a sense of community and friendliness that recalls friends trying to one-up each across a bar.

“The fact that we’re all here in Kensington helps all of us. It brings people to the neighborhood. I’ve had a number of customers referred from other places and I’ve referred customers, too,” said Dean Browne, owner of Rowhouse Spirits.

“It’ll be great. We can collaborate and set up a Philly spirits trail. The more we all communicate, the better craft distilling will be in Philadelphia,” said Cassell.

Collaborations and celebrations of the community may still be a ways off since many of the distilleries are in their infancy and are working hard to succeed in a cutthroat industry.

“Dean from Rowhouse really helped us get started and get licensed,” Brian Forrest of Red Brick Craft Distillery said. “He had done it before us so he was a huge help. It never felt like we were competing, just working towards opening good businesses in the neighborhood.”

So without further ado, we introduce our readers to “Distillers Row.”

Kensington’s Federal Distilling brings craft vodka to Philadelphia with Stateside Urbancraft Vodka, which is distilled from corn and is still bottled by hand in the neighborhood. Matt Quigley, the distiller, honed his skills through years of practice and surreptitiously distilling in his parents’ basement. Today he runs his business with his brother, Brian. 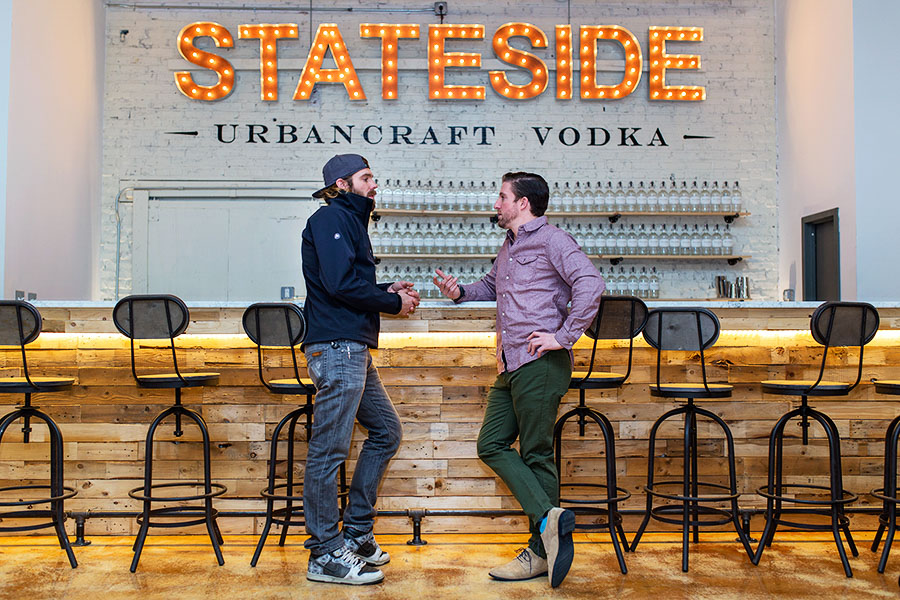 “In craft distilling, vodka only covers about 7 percent of craft spirits,” Quigley said. “If we open up and make our core focus a super premium local vodka and don’t stray from that I think we’ll be successful.”

Federal’s Stateside vodka is crisp and clean. There’s a subtle, unobtrusive sweetness from the corn. The vodka is soft and balanced and would be just as enjoyable on the rocks as it would be as a cocktail spirit. Quigley chose corn, in part, because it’s easy to purchase and can be grown sustainably.

“The access to your raw ingredient is going to be there for days. It’s not like trying to source some abstract base that would be subject the environmental conditions,” he said. “It gives a lot of bang for your buck. It gives a lot of sweetness. I’ve used it in the past and I just prefer it.” 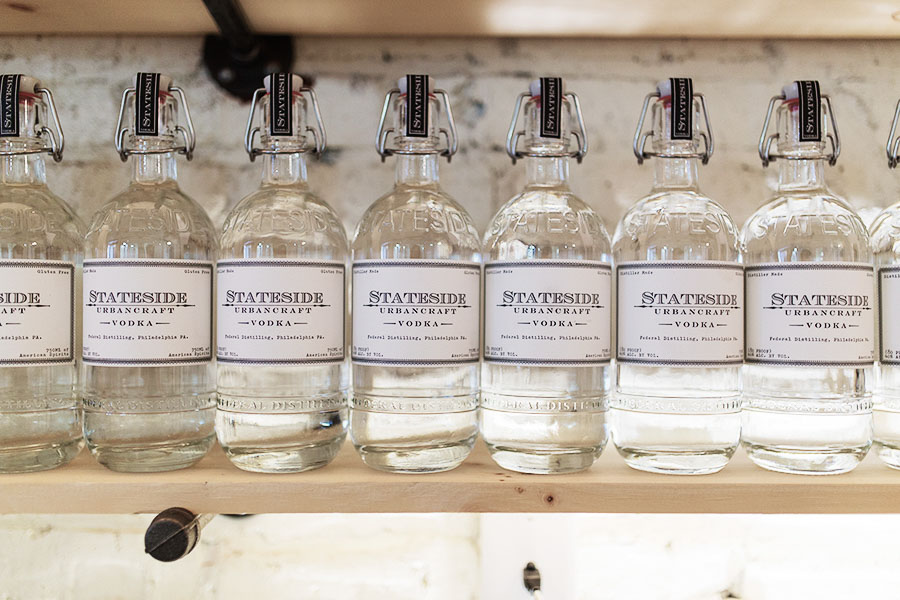 Currently Federal Distilling produces roughly 5,000 bottles of Stateside per month. The Quigley brothers distillery is housed in an industrial looking warehouse that gives the ambitious brothers plenty of room to expand. Currently, Federal Distilling occupies 6,000 of the available 15,000 square feet.

“There are options to expand into different pockets of the building. We know we’re going to outpace this space once we build a full on bottling line,” Quigley said. “Kensington is like the Brooklyn of Philly. Brian and I both live in South Philly. He is moving to Kensington in the next couple weeks. We liked the expandable area: There’s a lot of warehouses here that have a ton of space.”

The brothers are still focused on getting their tasting room open to the public and Quigley says they are looking forward to collaborating with other distillers in the area once their own house is 100 percent up and running. “We’re not even open to the public yet and we’ve been booked 45 times for private events,” he said.